Jackie was in her 40’s when she visited LasaDerm. A mum of two, who was always on the go, she had a job that also required her to always be on her feet. Over time, the veins in her legs became very enlarged and started to ache and at times were painful. The aching and pain were worst on the days she was on her feet all day, and she started dreading her longer shifts. She was also always conscious of them. After suffering for many years, she felt it was time to do something. The final straw was, not that they had started to turn a bluey/ green and were bulging, but the fact she had to resort to wearing long trousers in the heat on a family holiday.

Jackie came for her consultation unsure if anything aside from surgery was possible for her. However, following her consultation, it was decided that the best treatment for Jackie was a procedure known as sclerotherapy. This is a procedure where a solution known as a sclerosant is injected into the veins causing them to shrink and collapse. Jackie was informed that due to the nature of her veins she would probably be required to have a course of 3 treatments at 4-6 week intervals to get optimum results.

Feeling adequately reassured and well informed she decided to go ahead. The post-treatment protocol was to wear compression stockings for two weeks to ensure the veins stayed collapsed and to aid faster healing.

At her follow up appointment five weeks post her first treatment, there was a marked improvement and this continued with her subsequent two treatments.

At Jackie’s final appointment with the Doctor in the summer, she even came in wearing her shorts! 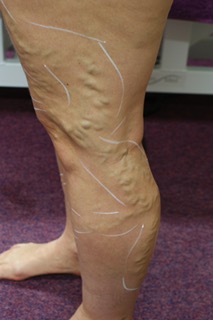 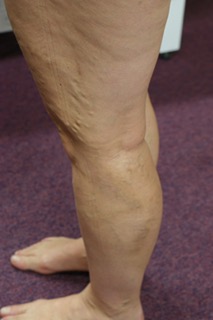