Nicky had noticed what she first thought was a spot on her lower lip. She didn’t really take much notice of it initially until it started to get a little bigger and also the fact that it had been there for many months now. She had also become very self-conscious of it as it wasn’t something she could hide with makeup or lipstick and it was also starting to affect her confidence. Her GP confirmed it was benign and therefore would not be covered by the NHS.

Worried about what the scar would look like and possibly ending up with a lip which was either puckered or distorted, she decided to live with the “mole”. This was till she met a friend who had had a mole removed from her forehead at LasaDerm. Happy with her own experience and the outcome that had been achieved, her friend recommended LasaDerm.

While moles can be removed by various methods depending on their aetiology, at the consultation it was confirmed that Nicky had a mole that would require surgical excision.
Reassured that she had all the information she needed, as well as reviews and before and after photos shown to her of other patients who had successfully been treated at LasaDerm, Nicky booked herself in for the procedure.

The surgical excision of moles in carried out in a purpose-built minor operation suite.

Prior to the procedure consent forms are filled, and review of the mole removal procedure are recapped.

Surgical excision of moles requires the area around the mole to be injected with a local anaesthetic and the mole then removed by cutting it out and stitching the skin back together. You may be requested to come back in for a review the next day. Stitches are removed 5-10 days later. 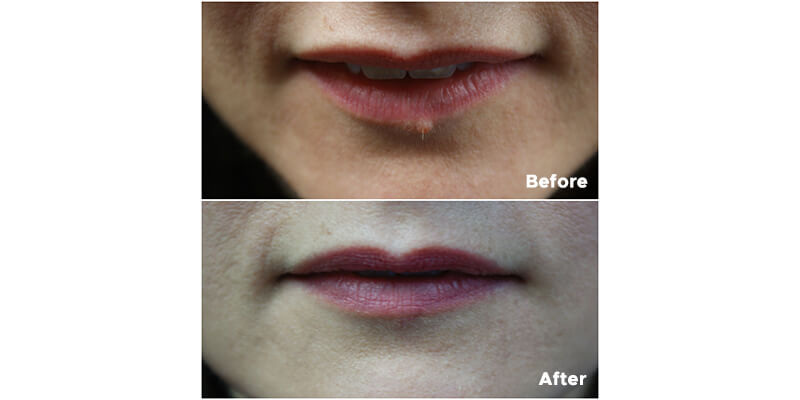 I was a bit apprehensive about the procedure, but the mole on my lip was just so ugly and my 1 year old would grab and pull at it.
The procedure was very easy and apart from when the anaesthetic is injected in when it stings a bit, I really didn’t feel anything including afterwards. I had been told to take paracetamol to ease any pain off in the first couple of days but I didn’t even need that. I was so worried about how the scar so close to my lip would look and also about how much it would cost. If I had known that for just £300 I could get such an amazing result I would have done it years ago. It’s like I didn’t have anything there at all, you really can’t see the scar at all.
Nicky12th June 2018