Skip to main content
Covid-19 Update: We are back open for all treatments. Please read our policy for information regarding your appointment.
01908 555595

Body Sculpting Procedure – An Hour At The Gym Or An Hour At An Aesthetic Clinic?

In the age of stem cell-derived super creams and radiofrequency skin tightening gizmos, tackling beauty woes with heat and cold seem downright archaic. But extreme temperatures have been the bedrock of all sorts of cosmetic tinkering. Now, though, ever more high tech applications of hot and cold are working below the neck and below the skin, for that matter, blasting away belly bulge and slimming limbs. When you’re dealing with fat, it turns out you can accomplish the destruction of fat using either heat or cold through a simple sculpting procedure.

What Is The Fat Freezing Body Sculpting Procedure?

Freezing the fat or Cryolipolysis Or Cryo or Coolscupting as its often referred to is a one hour, no fuss, no muss, fat-cell-destroyer that requires neither healing time nor a single stitch-or even say, the formality of alerting one’s spouse to the fact that you are “having something done.”

The impetus for using cold to “defat” has its roots in the early 70’s when some papers were published about a condition dubbed ‘equestrian cold panniculitis’. A handful of female horse riders found that after long rides in the cold, ‘their thighs would freeze and their fat would become inflamed and ultimately disappear’. This wasn’t weight loss resulting from a good hard work out-it occurred because fat cells die off at temperatures that muscle and skin are able to withstand. But there’s a reason it took decades for science to harness that revelation. It has to be done in a very controlled fashion, at certain temperatures, to a point where you are going to get the destruction of the fat without destruction of the surrounding tissues.

What Happens During A Cryolipolysis Fat Loss Session?

During a CRYO session, a moulded cup is placed over the lower stomach, love handles or bingo wings for example; heavy duty suction pulls pudge inside the cup, where it’s chilled to -4 degrees C. Some of the fat cells are destroyed and ultimately disposed off by the liver, a process that in all can take up to 3-4 months. The manufacturers were able to demonstrate a minimum 25% reduction in the fat that fits in the cup for treatment,” says Mrs Dewji. “That’s a very high level of efficacy”. 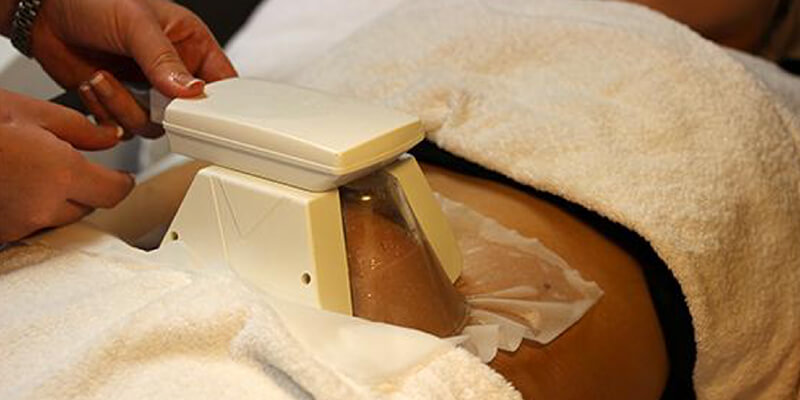 “At the biotherapeutic Office, Joanne, the friendly unflappable therapist, applied a cold, slimy sheet of protective gel across my lower stomach to shield the surface of my skin; lined up the machines oblong handpiece on top of this, about an inch below my belly button; and turned on the device. Suction? Well, for a touch-and-go moment, I feared that my roll wasn’t the only thing that would be sucked into the device-it seemed entirely feasible that the rest of my body, and Joanne along with it would somehow follow suit. After about 5 minutes, though, we were both still there, and my stomach had gone numb. I felt next to nothing for the next 60 minutes and clicked calmly away at my phone until Joanne reappeared, powered down the machine and popped off the suction cup. My flesh, embarrassingly malleable had behaved like Jelly in the mould of the device, and it was now frozen in the shape of a cold, pink, lifeless brick, distinct from the rest of my abdomen. Joanne briskly set about massaging this new topological feature and within seconds my body had reaccepted it. Minutes later, I was back at work on the motorway on my way back to the clinic, with a still numb belly lying cold and surreal beneath my dress and a mind ringing with Joanne’s parting words; “Wait till you see what happens in 4-6 weeks and the beauty is it carries on working for up to 3-4 months. You’re going to love it.”

So what was my verdict?

“I was absolutely thrilled. So thrilled that WE invested in the procedure for our clinic.”

Why Did We Choose 3D Lipo at LasaDerm?

“Because it encompasses a 3-dimensional approach to targeted fat loss for larger areas such as the stomach and love handles, thighs, hips etc. Many less sophisticated Lipo devices use diode lasers as the medium to remove fat but they are dependent on significant immediate exercise to achieve results, and for most of us this is where the problem lies. “I, for one, know that if people could fit in at least 30 minutes of exercise 5 times a week, they probably wouldn’t need to resort to using the procedure.” We know that exercise is an integral part of a healthy lifestyle, but if you are fairly active and just not able to shift those pockets of stubborn fat, then that is where these procedures should fit in.”

“I have had people call me up, stop me in the street and ask if they can get 3D Lipo on their full body. To get what you want out of it, you have to be able to pinch an inch, and can’t have a BMI of more than 30, the cut-off for obesity. You have to be pretty happy in the skin you’re in and really just trying to lose little problem areas. For many people, fat loss with 3D Lipo equates to a skirt size, maybe a belt loop or two.”

Mrs Dewji adds – “In Europe and The United States, the numbers of surgical liposuction procedures are fast being replaced with heat or cold based treatments delivering excellent results without the need for surgery and at a fraction of the cost.”

“I need to know that the treatments we offer in our clinic are safe, effective, scientifically based and fit in with our ethos of holistic care for our clients. 3D Lipo has delivered this for us.”

“As a clinician, I need to know that the treatments are safe, effective, scientifically based and has delivered this to us.”

Get in shape with our fat-busting treatment which now includes fat fre...

The Most Transformative Cosmetic Treatments For A New You

A new year is the perfect opportunity to reinvent yourself and add to...

Is The “Thread Lift Procedure” The New Face Lift?

A few years back, Gwyneth Paltrow made headlines for endorsing a cosme...

Are You Tired Of Looking Tired?

Under-eye circles are dark patches that are visible under the eye. Dep...

Previous Post What Should I Know Before Having Botox?
Next Post What Are The Best Anti-Ageing Solutions?