In February 2018, the blogger, journalist and TV personality, Tracy Kiss visited the Lasaderm Clinic for a Pilar Cyst Removal. She had previously had the cyst removed several years prior, but following the birth of her son, the cyst had gradually regrown in the exact same spot as before. This occurred because the cyst had not been entirely removed the first time. With the cyst growing right on the top of her head, and catching on her hairbrush constantly, she felt it was time to have something properly done about it.

Prior to the treatment, Tracy visited the clinic for a consultation, where we examined her head and provided her with relevant medical advice. Following the consultation, she booked in to go ahead with the treatment a few weeks later.

When it came to the removal procedure, we trimmed the smallest section of her hair back to expose the cyst. Our doctor then cleaned the surrounding skin and gelled the hair back, preventing it from getting in the way. We then used local anaesthetic to numb the area and ensure the treatment was as pain-free as possible. 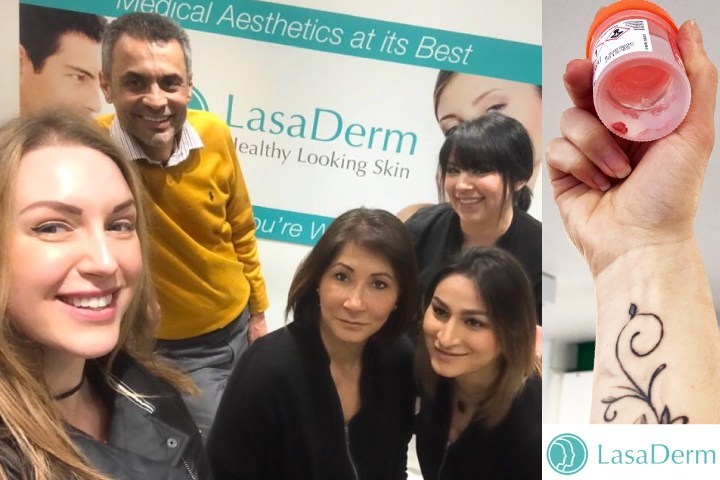 We then proceeded with minor surgery. Tracy’s cyst was removed using the excision method that requires a local anaesthetic injection to numb the area, and then the cyst is cut out. The wound is then stitched back up and left to heal for seven to ten days, when then the stitches are taken back out. All minor operations at Lasaderm are performed by a fully qualified and experienced doctor, carried out in a purpose-built minor operations suite.

Following the procedure, Tracy states ” The procedure didn’t hurt, wasn’t unpleasant and was over with surprisingly quickly. The longest part was the stitching for which I have three small non-dissolvable stitches that will need to be removed in around a weeks time.”

She then goes on to say that “I’ve had no side effects, pain or discomfort and cutting into previous scar tissue wasn’t a problem.” Due to the success of this treatment, Tracy returned to us just a month later to have a Sebaceous Cyst removed.

Like the previous cyst we had removed for Tracy, this sebaceous cyst was also on the top of her head and making hairwashing/brushing uncomfortable. The sebaceous cysts are also much more susceptible to becoming irritated and infected, especially as they grow in size. The best thing Tracy could have done was have it removed as soon as possible, which is exactly what she did.

Similarly to Tracy’s previous treatment, we trimmed a small section of her hair away, cleaned the skin and gelled the surrounding hair down. We then injected the local anaesthetic to the affected area and proceeded to remove of the cyst. Within 20 minutes, the whole procedure was over and done with and she had been stitched back up. She was told to keep her hair dry and clean for the next 48 hours and then return to us in seven days to have her stitches removed and a check-up appointment. 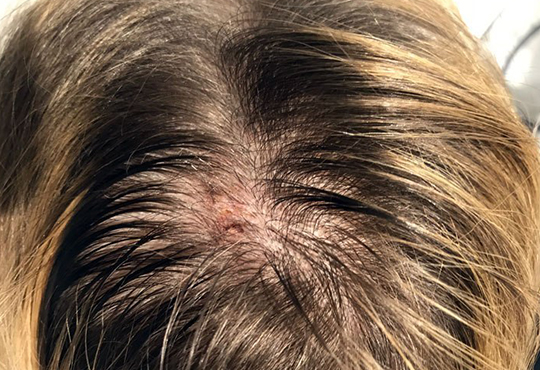 The appointment seven days after the procedure took only a few minutes to remove of the stitches, which she recalls as being conveniently quick and pain-free. Tracy is now able to run her hair through her fingers and feel soft, lump-free skin. The scar that has been left behind will also fade over time and will, at some point, be totally unrecognisable.

If you are looking to have a cyst of yours removed, then make sure to get in touch with our team and book in for a consultation with our doctor. For a more in-depth account of Tracy’s journey with us, here at LasaDerm, head over to her blog page and personal website.